skip to main | skip to sidebar

Give me a break. No matter what your political persuasion is, I find it a stretch that a spending bill means the end of our country. The previous administration already spent more than this on the bank bailouts, not to mention the Iraq war. I agree this spending won't solve our problems, but I have to laugh at the drama queens on the right. We'll see I guess.
And again on this post:

It seems as though you're upset with at least the last 100 years of US govt policy. There was a constitutional amendment to create the income tax, which has always been a tax that fell mostly on the wealthy. (Originally it was a tax only on the wealthy). So the tax system is by definition constitutional, since it's in the constitution. I think our government has had the power to raise money and carry a debt more or less since the beginning of the country. You're very against Obama and this spending bill, but I think you should argue it on the merits rather than saying that the government has suddenly run amok, when there is really nothing fundamentally new here. Previous administrations for at least the last century have been doing the same thing.
Dave is making a couple of arguments: First, that a spending bill isn't the end of the world - we managed to survive the higher spending of the Bush years; we will survive this.

Here he makes a couple of mistakes. First, about the amount of spending over the last eight years - below is a graph from the Wall Street Journal posted by Greg Mankiw showing the nation's debt related to the GDP since 1980:

Granted, the last eight years haven't been great, but the stimulus debt for this year alone (and remember, the spending is projected for several more years) dives well into uncharted territory.

Dave's next error is blaming "the administration" when it is congress that controls the money. The president may ask, demand, beg, or cajole, but he doesn't get a penny unless the legislature gives it to him. And for the last two years, that would have been a democratic legislature keeping the money faucets open full blast.

And that money kept flowing because congress had no incentive to shut it off. Dave mentions the war in Iraq, but overlooks additional hundreds of billions spent on pork-filled agriculture, transportation, and prescription drug plans - all written in the congress not the White House.

Therefore, a more accurate, if less emotionally satisfying, way of phrasing it would be, "For the last eight years, the congress, whether controlled by democrats or republicans, and with the approval of the president spent the hell out of the economy."

The best thing however, about Dave's Tu Quoque argument is I can give the entire thing away and agree completely - you got me - George Bush used his mind control powers to subvert the constitution and trick the congress into giving him the keys to the treasury, then proceeded to bankrupt the nation playing high stakes Texas Hold'em with Vladimir Putin.

But it still leaves the question of how spending another trillion dollars we don't have is going fix things.

Dave next claims the stimulus won't be the end of the country - apparently because that's just what us right wing drama queens say will happen. I'm not sure about the connection here, but apparently it is some variation on the Cassandra theme where the truth of the message is contingent on the messenger.

A republic can survive only so long as there is a clear line between the government sphere and the private one - the more defined that line the better, and as that line is erased, so also, is individual liberty.

To illustrate, here is another graph, this time from Fabius Maximus: 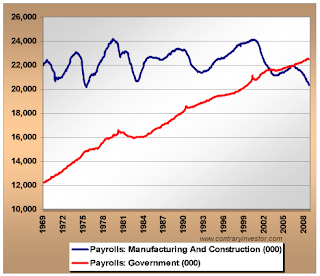 Every data point on that red line represents someone whose livelihood, whose mortgage payment, grocery bill, and car payment is provided by taxes. Add to that welfare, social security recipients, and the beneficiaries of all other federal largess and ask yourself what freedom can there be when so many are demanding the legislature pick your pocket to provide them their daily bread?

But there is more, because hidden within the thousand pages of stimulus legislation are the seeds of new and expanded bureaucracies - more and more people added to the payroll who create no wealth yet will require pay, and vacation, and medical insurance, and pensions - all on your dime.

And when it comes time for your congressman to troll for votes, are you so sure he won't find it easier to take more of what is yours and give it to them in return for those votes?

He won't if he is a man of the highest moral and intellectual caliber - Washington is just full of those types... right?

Finally Dave argues, that all reservations aside, the government is acting with its constitutional scope, so whatever we think is academic, because the rules say the government can do what its doing. That worked so well for Dred Scott didn't it?

Funny thing that constitution - it has a letter and a spirit, and depending where you are standing and which way the wind is blowing, you are an advocate of one or the other.

Schools in the south still segregated? Just send in the troops, and if the constitution doesn't explicitly say you can, It certainly implies it - so says the supreme court. Abortion, death penalty abolished and reinstated, Miranda warning... same with all of those. And all were accepted because the people generally agreed that in order for this to be the country they wanted, those things had to be.

But can you think of any means short of violence whereby they could have been imposed had the vast majority been adamantly opposed? In the end, what is constitutional is not what the congress passes, or the supreme court decides, but what the citizens will accept.

The usual recourse when the government has pushed too far beyond what the people will accept is to vote the bums out. The problem with the stimulus package is many of its provisions exist specifically to insulate the government from that possibility.

If you can vote every November, you have a democracy, but if the government is immune to fundamental changes because too many are dependent upon it for sustenance to allow that change, you no longer have a republic.
Posted by Mike at 6:55 PM

"It seems as though you're upset with at least the last 100 years of US govt policy." Yes--yes we are. Very much so. Perpetual deficits are just not sustainable, any more so than an ever-increasing credit card bill.

But borrowing several terabucks per year is merely a bad idea, not an unconstitutional one. "To borrow money on the credit of the United States;" is indeed one of the explicitly enumerated powers of congress listed in Article I.8. And I thought this was ironically funny: amendment 14, section 4 begins with "The validity of the public debt of the United States, authorized by law, including debts incurred for payment of pensions and bounties for services in
suppressing insurrection or rebellion, shall not be questioned."

Recall this was voted in *after* the 1st amendment, which means a supremo shyster lawyer might be able to claim that our questioning the ever-more ridiculous magnitude of the public debt is itself unconstitutional!

Mike, I love that you named and defined a fallicous argument on your blog. Logical thinking and retoric have been dying ever since they stopped teaching it in school. But I guess that goes with not teaching people to think independently too.

Keep up the good fight.